Future Mobility Corporation is a Chinese automobile manufacturer established in 2016 and incorporated in Hong Kong,[1 co-founded by former BMW and Nissan Motor executives. It announced its first proposed car under the new Byton marque in September 2017 and unveiled its first concept car to the public in January 2018.

The company was co-founded by Carsten Breitfeld, CEO, and Daniel Kirchert, president, and successfully recruited staff from a range of international companies, including senior staff from the BMW iprogramme and Tesla.

It is a subsidiary of China Harmony New Energy Auto Holding Limited.[5]

In January 2017, the company announced its first manufacturing facility would be located in Nanjing, China at a cost of US$1.7 billion and an initial production capacity of 150,000 cars. 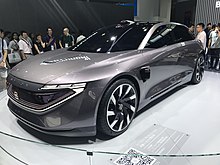 The company announced its ambition to launch three electric car models by 2022.

The first announced is the mid-sized Byton crossover, but only in concept form, with sales expected to commence in the fourth quarter of 2019 in China, Europe and the US. It was unveiled at the Consumer Electronics Show in Las Vegas on 7 January 2018.